An Open Letter From a Friendly Atheist to His Holiness, The Pope

My Dearest Mister Pope,
My Facebook Machine recently decided to show me a thing you worked on called "Top Ten List For Becoming A Happier Person".
Obviously I clicked… although I clicked with some skepticism and maybe a little too much cynicism, because as I clicked a voice in my head said, "Why does everybody think they need to be happier? It'd be cooler if it was a top 10 list for becoming a kinder person." But then another voice pointed out that the first voice was just trying to use kindness as a way to be a judgemental asshole. We took a vote and myself and the rest of the voices sided with the second voice while conceding that the first voice had a very lovely and morally important point. I'm not sure what the final count was, not everyone was there for the vote.
Anyway, I read your happiness thing. It's very good. You should be proud of yourself. But hey, not too proud, you crazy "born with original sin" human, am I right? 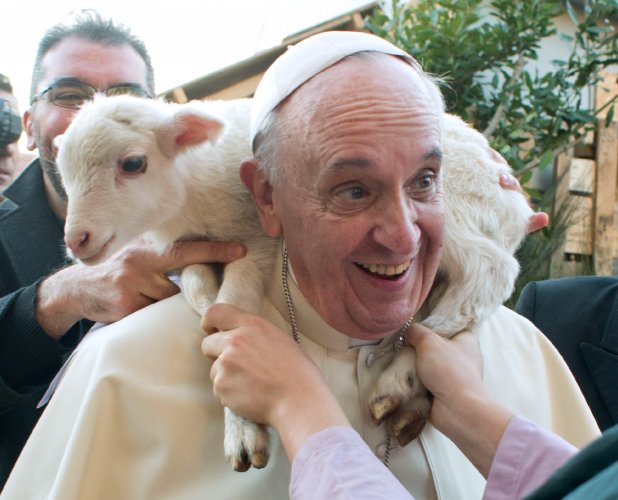 It really is a very nice list. Spot on, Popey me old mate. Stonkingly good advice for how to try to be mostly awesome!  Although number 8: "Stop being negative" is a bit of a paradox… I'm gonna assume someone else was paraphrasing you.  I'm sure that happened to Jesus all the time too.
Now... if you could just put down the adorable goat (when you're ready, dude, I get it. I loves me a baby goat too, ask anyone) and get back to your job of running a gigantic religious empire, that'd be great. A lot of people are counting on you and I think that goat can probably walk on his own now. He's sure gonna wonder why his footsteps suddenly disappeared back there in the sand though!
I don't know... maybe on Tuesday after a nice coffee and some tweeting you could try to get that birth control dogma nonsense sorted… I mean, surely seven BILLION people is enough, even for God, am I right?
Maybe Wednesday you could sell off some of the Vatican's gold and give it back to the poor people who paid for it (or their descendants at least). Man would that ever make you popular (or Pope-ular)! That'd be better than 500 goats!
And then that whole crazy "women can't be equal" problem, that's gonna take up all of Thursday and Friday. I don't know why a centuries-old "celibate" boys club has a problem with women. I bet it's the Bishops, isn't it? Well, you know what they say, "Bishops be crazy!"
And then on the weekend maybe try to think of a plan to use all that sweet Catholic church money for even more kindness and charity. I mean you can do all the goat lifting you want, but you are still gonna be BANANAS rich and part of your job is to tell all those people who love you and look up to you all about how they'll be treated after they die and so forth… I mean, dude.  That's a whole meta… Spiderman's Ghost kinda level of Great Responsibility job description you got there. You are literally the project manager of a project where the very first project manager actually was Jesus.  I sure couldn't do it.

I agree with you completely about Sundays.  Keep that day Holy!  On Sunday afternoons I go to my local pub in Victoria, Logans "Tavern of the Damned" and attend a service of sorts called "The Hootenanny".  My friend Carolyn Mark started it 20 years ago and it helped me realized that spending time one day a week engaged in a ritual of love and music with your friends and neighbours is really important.  It's my secular church service and my heart aches when I don't get to show up and sing a holy Tom Waits or Warren Zevon hymn with some of the people I love.  You should drop by... oh crap, I think they make you work on Sundays, don't they?  That sucks, dude.
Don't get me wrong, I think you're great, current Pope. You seem to have actually read the important parts of that manual you guys use. You seem to have love in your heart and kindess in your soul. And yeah, I do believe in a soul. And I do believe in Love. That's really all I believe in.  I'll grant you that I have no concrete evidence to prove that Love or my Soul scientifically exist or that I should believe in them.  But I do.  So we have something in common there.
Any way, I'll work on your list and you work on mine and maybe we'll both start getting closer to what our mutual pal, Jesus "Shut Up And Love Each Other" Christ was on about… you know, before he got killed and magically became an angry flying zombie… We can talk about that issue next time. I'll try to be less mean in my next letter if you write back! Pen pals for life, Popey-poo!
Love,
Wes Borg

Wes Borg is a Canadian comedian, playwright and musician from Edmonton, best known as a member of the comedy troupe Three Dead Trolls in a Baggie. Borg now resides in Victoria, British Columbia.  You can hear more of his hilarity by buying his album on CDBaby or iTunes.  Or you could see him live monthly in Victoria at "Wes Borg's Cavalcade of Whimsy" or at "Derwin Blanshard's Extremely Classy Sunday Evening Programme" or pretty much any Sunday afternoon at the Hoot.
Posted by Unknown at 12:52 PM